Opening of the Guggenheim, Abu Dhabi, 2013

Ned and Burka Woman felt right at home at the Grand Opening of the Guggenheim in Abu Dhabi, 2013. Ned suspected that Canadian-American architect, Frank Gehry, had modelled the stunning museum design on the lines of his own unique armour. And Burka Woman really enjoyed showing off the Sidney Nolan works of Ned Kelly to her female UAE friends.


Burka Woman reminded her good friend that while the 2009 Janasse "Chaupin" Châteauneuf-du-Pape was indeed a magnificent and noble wine being served at the Grand Opening, it was worth keeping in mind that its alcoholic content of 15% could have quite an intensive effect after downing a few. 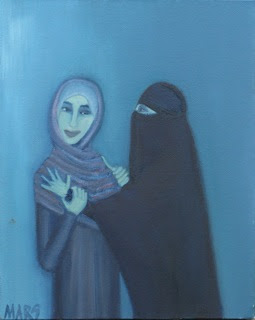 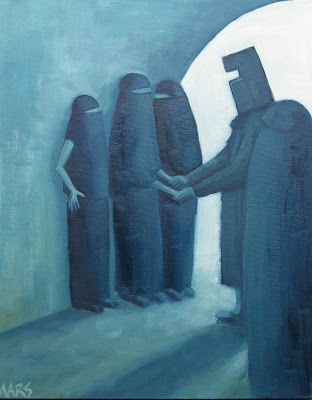 Burka's sisters were very pleased to meet Ned at last. They had heard so much about him in Burka's letters, and trusted him as the right person to help them settle into a new way of life in Australia.
Having survived a brutal invasion of their home country by the West, and the perilous journeys by leaky boats from one country to the next, staying over six months at a time in numerous open refugee camps, the three sisters finally made it to the designated secret Northern Australian island beach.
The sisters clung to each other, weeping silent tears of joy, sorrow and relief, before being whisked away to a safer meeting place.... out of sight from those people who would have them locked up for their heroic desperate efforts to choose life over death, safety over living in terror....

Posted by Mars Drum No comments:

Robert Nelson on "In Habit"

You'll find on this site my 2004 Ned and Burka series: "A True Story and a Love Story"

And then the "Beyond the Burka"paintings which were exhibited in March 2011 at the Arthur gallery, Ballarat.

The "Ned and Burka - old and new works" show was held in April 2013, at The Goat Gallery, Natimuk, Victoria.

* You can learn more about me and my recent work, which includes photo stories of Ned and Burka, or if you would like to view the Ned and Burka oil paintings which are still available to purchase, click here: www.marsdrum.com

I began to wear a burka out on the streets, to festivals, exhibition openings, rallies, parties....

I could see that the Australian media frenzy surrounding the 9/11 event was breeding instant anti-Islamic sentiment amongst the Australian public, and by wearing the burka, I wanted to expose this new breed of racism. The women who had always worn burkas in Melbourne were suddenly confined to indoors, not due to their own law, but forced to do so to protect themselves from a growing seething hatred of anything to do with “Islam” from people who believed themselves to be “real Australians”. 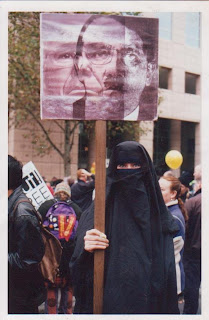 At first, I found wearing the burka in inner Melbourne so soon after the collapse of the Twin Towers to be rather a dangerous experience. At Brunswick Street festival 2001, I had all sorts of white trash mainstream media victims addressing me aggressively, fists clenched. Strange men approaching me on the street, demanding that I "take that thing off immediately" and " Get the hell outa here"...one stupid bloke told me he wanted to hit me for being out in the public after what had happened in the USA. I had a couple of my male friends walking behind me at that festival to step up in my defence when the situation got too heated. Strange girls that day would offer advice to me like: "You should go home" or "That's not funny, you wearing that out on the street"...

My photo was discovered in the Mx.

I used this particular image of Howard to share an eye with Hitler, as it was the face that he pulled for the main newspapers during the Tampa Children Overboard election campaign... his face surrounded by ocean... 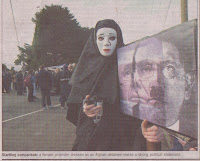 This is me at a refugee rally at Maribyrnong Detention Centre, 2005.

I wore my burka on and off for the next few years. It was surprisingly liberating to wear the burka...to be anonymous... shapeless... no-one measuring me up and down, including myself...

It was also addictive.

Weaning myself off the burka was confusing, as I had no idea what to wear anymore! I had been through years of wearing uniforms before donning the burka... dental nurse, tram conductor, air hostess, nun, checkout chick...the burka put an end to all that... it was time to move on, but my sense of direction was confused, what does one wear beyond the burka?